GAME GIRLS is a feature documentary about the hopes and dreams of women living on the extreme fringes of contemporary American society. It sheds light on the unseen and unheard stories Los Angeles' Skid Row, best known as "the homeless capital of the U.S.A.". Alina Skrzeszewska has about a decade of experience in the neighborhood, having lived and filmed there before.

For GAME GIRLS, Alina and her production team started an 18-months-long drama-therapy workshop program open to all women in the community and facilitated by a Registered Drama-Therapist. In the workshop, the women are personally challenged as they struggle to connect with their memories, hopes, and long lost dreams, sometimes buried underneath a history of trauma, addiction, incarceration, and poverty.

The women of GAME GIRLS are mothers, daughters, sisters, friends and girlfriends. Alina Skrzeszewska films each of them with great sensibility, creating powerful portraits of women whose faces and bodies carry histories of trauma. Like evocative landscapes, they invite us to look beyond what is visible, thus allowing a new perspective on complex social issues exacerbated by poverty (such as childhood trauma, domestic violence, drug abuse, mental health issues, discrimination based on race, gender or sexual orientation, police brutality, incarceration).

They are all struggling to transform their lives. They are forging new identities that will bring them closer to the life they once dreamed of. As they continue to live in a rough environment, they are attending the workshop, allowing themselves to be vulnerable and hopeful once again. This transformative process is captured in a deeply intimate way, making GAME GIRLS a visceral and immersive cinematic experience for the audience. We recognize ourselves in these women, and find our prejudices and misconceptions challenged. 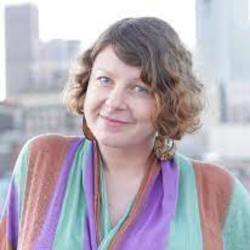 Alina Skrzeszewska was born in Warsaw, Poland in 1977. Her family emigrated to West Germany and she grew up in Munich. She studied stage design, art and media at the Berlin University of the Arts and film and video at California Institute of the Arts. From 2007 to 2008 she lived in a hotel on Skid Row in Los Angeles, a neighbourhood which inspired several of her films. Her first feature-length documentary SONGS FROM THE NICKEL screened at international festivals and won a number of awards. Her feature length documentary GAME GIRLS had its world premiere in the Panorama Dokumente section of the Berlinale 2018.

No screening due to the holiday.