YURUMEIN (your-o-main) is an important UNTOLD STORY of Carib/Garifuna resistance against slavery that deserves its place in the annals of the African Diaspora.

The film recounts the painful past of the Caribs on St Vincent and the extermination of scores of their ancestors at the hands of the British, while building an intimate portrait of Garifuna culture in-transition today. We are given firsthand accounts from both Carib descendants who remain on the island of St Vincent and voices of returning descendants whose ancestors were exiled to Central America-where Garifuna traditional culture was able to survive and flourish.

When members of the Diaspora are first reunited and make a collective pilgrimage to the sacred site of Balliceaux (where the genocide occurred) the film reveals the beginnings of a movement among Garifuna people to revitalize traditional language, music, dance, and ritual. This scene features the Garifuna National Folkloric Ballet of Honduras.

As Garifuna from around the world come together to remember and celebrate the lives and resilience of their shared ancestors, they also begin to discover possibility and hope for the future of Garifuna culture and a greater worldwide community. The film includes original music by Garifuna artists: Andy Palacio and Rhodel Castillo. Additional music by Abuza from St. Vincent. Original artwork by Garifuna artist Greg Palacio. 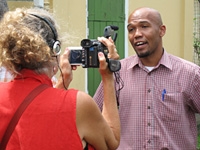 Andrea Leland is an independent filmmaker and artist. She has produced and directed award winning documentaries focusing on Caribbean and Latin American cultures. In Haiti, Belize, Chiapas, and several Caribbean islands, she works collaboratively with community members providing a forum to voice their untold stories, personal challenges and compelling triumphs. Social, artistic or political actions are placed within context of their culture, imploring the viewer to confront old myths and discover a new perspective. These documentaries are successful tools for cultural preservation.

Andrea is a member of Newday Films. She is the co-founder of the St. John Film Society which presents independent films free to the public on the island of St. John in the US Virgin Islands.

Q&A with director Andrea A. Leland after the screening.

Q&A with director Edward Landler after the screening.