What Of The Day: Celebrating a Century of Service, The Phi Beta Sigma Fraternity Story, is a feature length documentary depicting the significance of the black fraternity movement in America, and chronicles one fraternity, Phi Beta Sigma, as it prepares to celebrate its 100th Anniversary. It is the fraternity of such civil rights and cultural icons as James Weldon Johnson, Alain Leroy Locke, Asa Phillip Randolph, John Lewis, Hosea Williams, James Foreman, Huey P. Newton, Bill Clinton, Al Sharpton and a host of others.

WHAT OF THE THE DAY: CELEBRATING A CENTURY OF SERVICE, THE PHI BETA SIGMA FRATERNITY STORY

Phi Beta Sigma Fraternity was part of every social change movement of the 20th Century, and began making its mark on civil, political and human rights in the 21st Century. The documentary is directed, written and co-produced by Dr. Anthony Asadullah Samad who is a member of the fraternity, and states, "I believe the public will be astounded to know how the members of Phi Beta Sigma Fraternity have changed their lives and the course of American history over the past century." 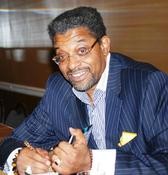 Anthony Asadullah Samad was born in 1957 in Brooklyn, New York. He graduated from California State University in Los Angeles with his B.A. degree in communications in 1980. Samad went on to receive his M.P.A degree in public finance from the University of Southern California in 1983.

From 1980 until 1984, Samad worked as a branch manager of Beneficial Finance. In 1984, he was hired as the vice president of Founders Savings, and, from 1985 to 1990, he served as president of Liberty Finance Management. Then, in 1991, Samad founded Samad and Associates, a strategic planning and urban affairs firm specializing in the assessment and management of public policy, economic development, urban, social and race issues. In 1996, he was hired by the Los Angeles Community College District, where he currently serves as a professor of political science and African American studies. From 1997 to 2007, he attended Claremont Graduate University, where he received his second M.A. degree in political economy, and then his Ph.D. degree in political science.

Samad has authored five books: Souls for Sale: The Diary of an Ex-Colored Man (2002); 50 Years After Brown: The State of Black Equality in America (2005); Saving The Race: Empowerment Through Wisdom (2007); REAL EYEZ: Race, Reality and Politics In 21st Century Popular Culture (2012); and March On, March On Ye Mighty Host: The Comprehensive History of Phi Beta Sigma Fraternity, Inc. (1914-2013) (2013). From 2007 until 2011, he served as the publisher of Who's Who In Black Los Angeles. Samad has also been a syndicated columnist, and an opinion leader, publishing articles in newspapers and websites nationwide.

Samad has membership in the Phi Beta Sigma and Sigma Pi Phi fraternities, and has served as a past master of Free and Accepted Masons, Prince Hall Affiliation. He has also been involved with the American Political Science Association and the National Association of Black Journalists. Samad was the Los Angeles NAACP branch president from 1988 to 1989, and, since 1999, he has served as the managing director and host of the Urban Issues Forum of Greater Los Angeles, a monthly public affairs forum that discusses critical issues impacting urban communities. He also served as the president and chairman of the board of 100 Black Men of Los Angeles, Inc. from 2007 to 2009.

Samad has received over 200 awards and citations for his community advocacy work, including elevation to the 33rd and last degree in 1994, the prestigious 2007 Drum Major Award from the Southern Christian Leadership Conference of Greater Los Angeles, and 2008's Member of the Year from the 100 Black Men of Los Angeles.

Q&A after the screening with Director/Co-Producer Dr. Anthony Asadullah Samad.