TALES OF THE GRIM SLEEPER is a devastating expose of official neglect in those murders that terrorized South Central LA for over 25 years. It includes interviews with the women who survived and with the Black Coalition Fighting Back Serial Murders, which since 1984 has protested the deaths and campaigned for the police to act.

TALES OF THE GRIM SLEEPER

Attorney Nana Gyamfi of the Black Coalition Fighting Back Serial Murders, will be present for the Q&A.

IN REMEMBRANCE OF BLACK WOMEN VICTIMS OF SERIAL MURDERS!

Over 200 Black women are missing in South Los Angeles and as many as 100 are believed to be victims of serial murders.

Lonnie Franklin had a churchgoing wife and a son, and was friendly and well-liked. At first, many in this impoverished but tightly bound neighborhood could not believe he might have been involved. When Broomfield arrives in South Central, some residents are suspicious, shouting "peckerwood" at him from down the street. As Franklin's friend, Gary, says to Broomfield, "Lonnie was a good guy to me. And this is a close-knit block." However, after their initial interviews, each friend reaches out to Broomfield individually to talk about Franklin's darker side. Broomfield's journey leads him to Brooks, who connects him with many women who say they were assaulted by Franklin and plays an integral role in getting his son, Chris Franklin, to discuss his father on camera.

TALES OF THE GRIM SLEEPER also includes interviews with neighborhood activists Margaret Prescod and Nana Gyamfi of the Black Coalition Fighting Back Serial Murders, who have been working for years to sound the alarm, pointing out that the case would have received far more attention in an affluent community. Prescod explains that police used a slang term, "NHI" ("no human involved"), when a victim was a prostitute, drug addict or gang member. Even after Franklin's arrest, Prescod has been leading the charge for justice, exclaiming, "We're here to say, loud and clear, that every life is of value. Could you imagine if these murders had happened in Beverly Hills?"

The film underscores the community's turbulent relationship with law enforcement. As Gyamfi, who is an attorney, says, "I tell my own son, you know, he's 16 years old, if something terrible happens and your mother's not home, here are the numbers of people to call. But whatever you do, don't call 911. No, literally. For what? So you come answer the door and they come pull you away?"

Though 100 women are believed to have been murdered by the Grim Sleeper, Lonnie Franklin has been charged on just ten counts. Five years after his arrest, with the case tied up in pretrial hearings, he has pleaded not guilty and remains in jail, awaiting trial. 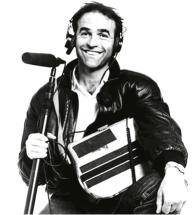 Nick Broomfield studied Law at Cardiff, and Political Science at Essex University. He then went on to study Film at the National Film School, under Professor Colin Young.

Nick first got interested aged 15 when discovering his love for photography on a foreign exchange visit in France. "A great way to strike up conversations, and a great excuse to ask questions about the World around you". He made his first film WHO CARES about Slum Clearance in Liverpool, while at University, by borrowing a wind up Bolex camera, and shooting it on short ends.

Professor Colin Young at the NFS had a great influence on his work encouraging participant observation, as well as introducing him to the lovely and most talented Joan Churchill. Together Joan and Nick made several films, JUVENILE LIAISON, TATTOOED TEARS, SOLDIER GIRLS, LILY TOMLIN and more recently AILEEN: LIFE AND DEATH OF A SERIAL KILLER. They also have a son together.

Nick was originally influenced by the observational style of Fred Wiseman,and Robert Leacock and Pennebaker, before moving on largely by accident to the more idiosyncratic style for which he is better known. While ?making DRIVING ME CRAZY in 1988, a film hopelessly out of control, Nick decided to place himself and the producer of the film in the story, as a way of making sense of the event.

This experiment led to a sense of greater freedom, from the confines of observational cinema, and led to a more investigative and experimental type of filmmaking. ie THE LEADER THE DRIVER, AILEEN WURNOS, KURT AND COURTNEY, BIGGIE AND TUPAC.

Nick Broomfield is the recipient of the following awards amongst others:

Q&A Attorney Nana Gyamfi of the Black Coalition Fighting Serial Murders will be present for the Q&A after the screening. Ms. Gyamfi appears in the film.