Side by Side is about the story of the 50/ 50 Group and the push for non-partisan participation of women in politics and public life in Sierre Leone. Founded in 2000 to promote greater participation of women in politics, the 50/50 Group has grown from a handful of women meeting in borrowed space in Freetown to a nationally recognized organization actively engaged in building a new post-war Sierra Leone. RT- 12:01

Mayme Clayton Library and Museum in association with the BADWest St. Clair Bourne 4th Monday Documentary Series Presents: Deeper Than Black Directed by Sean Addo & Side by Side Directed by Dwayne Johnson-Cochran

Side by Side Directed by Dwayne Johnson-Cochran 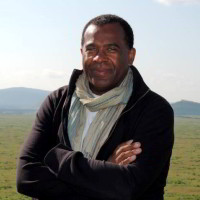 Dwayne Johnson-Cochran is a writer, producer, director and educator based in Los Angeles. Born and raised in Chicago, Johnson-Cochran trained as a geologist the University of Illinois and worked for an oil company briefly until he found his true calling as a filmmaker. He was accepted into the MFA program at the School of the Art Institute in Chicago where he learned filmmaking and film history. After working as a journalist and cameraman for local newspapers and television stations, he found a position as a writer/producer with Burrell Advertising producing numerous commercials and short films. A few years later Johnson-Cochran joined the local PBS station WTTW-Chicago producing, writing and directing documentaries including "Going Home to Gospel with Patti LaBelle (producer), "Babies at Risk", on infant mortality in Chicago (producer) and "School Reform-Power to the Parents", (associate producer) along with the nightly news show 'Chicago Tonight.' Mr. Johnson-Cochran has taught screenwriting for eleven years as a instructor in the USC's Guy Hanks and Marvin Miller. Screenwriting Fellowship and in 2012-13 he taught month-long screenwriting workshops in Kenya, Ethiopia, Sierra Leone and South Africa.

Also an lecturer/trainer for UNESCO with concentration in screenwriting, directing and documentary film-making in various countries. Johnson-Cochran is a two-time winner of the 'Mentor of the Year" for the Fulfillment Fund of Los Angeles. He has also worked with Oxfam, Save the Children, NDI and Doctor's without Borders on various missions. In 2016, "Be Known" was nominated for Best Independent Documentary Black Reel Awards and "White Water", produced by Dwayne Johnson-Cochran was also nominated for two NAACP Image Awards for Best Screenplay and Director.

Deeper Than Black
Never forget who you are.
A Ghanaian-American filmmaker looks to bridge the divide between his African pedigree and American birthright by confronting the question: "Who am I, and where do I belong?" Born and raised in the United States to Ghanaian parents, Director Sean Addo, a product of two different cultures sets off on his quest to clarify his identity. Propelled by his fear of the loss of his Ghanaian culture, Sean looks to connect to his African heritage through dance, food, and language. RT - 23:30

Following a filmmaker's journey from Ghana to China and back to Africa, Guangzhou Dream Factory provides a rare glimpse of African aspirations in an age of endless outsourcing. The film features a dynamic cast of men and women from Cameroon, Kenya, Nigeria and Uganda, 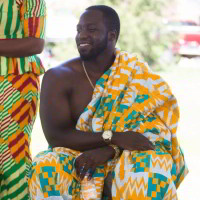 Writer and Director Sean A. Addo started his career in Digital Design and Motion Graphics. After graduating from the University of Cincinnati's DAAP program he would work at Fish Eggs TV, The Procter and Gamble Company doing VFX, 3D modeling and animation. Sean's relationship with animation would eventually evolved into a passion for cinema. After acquiring a MFA from USC School of Cinematic arts, Sean would go on to work at a commercial production company called World War Seven wile working on several projects of his own. His credits include cinematography on the indie feature film, Inquisitor, writing and directing the film Medowo. As well as directing and starring in the award winning short documentary Deeper than Black. Much of his work seem to be center around the exploration of identity through an emotionally, provocative story, much like Amerikafo, his latest written feature film. Aside from working on his own film projects Sean has currently launched his own production company IVSIGHT, alongside co-founder Harry Locke IV.

Director Dwayne Johnson-Cochran will be present for a Q&A after the screening.