Meet Mama Gloria. Chicago’s Black transgender icon Gloria Allen, now in her 70s, blazed a trail for trans people like few others before her. Emerging from Chicago’s South Side drag ball culture in the 1960s, Gloria overcame traumatic violence to become a proud leader in her community. Most famously, she pioneered a charm school for young transgender people that served as inspiration for the hit play Charm. Luchina Fisher’s empathic and engaging documentary is not only a portrait of a groundbreaking legend, but also a celebration of unconditional love, the love Gloria received from her own mother and that she now gives to her chosen children. And it is driven by the love that Luchina has for her teenage transgender daughter, Gia.

Mama Gloria is a co-production of Little Light Productions and Black Public Media with major funding provided by the Corporation for Public Broadcasting, The Field Foundation of Illinois and WORLD. It has received additional support from Sisters in Cinema, SouthPaw Video Productions, the 2020 Athena Film Festival’s Works in Progress Program and Women Make Movies Production Assistance Program. 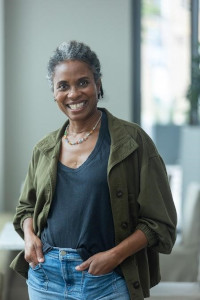 Luchina Fisher is an award-winning writer, director and producer whose work champions themes of race, gender and identity, loss and resiliency. Her feature directorial debut Mama Gloria, about Chicago’s trailblazing Black transgender icon and activist, premiered in 2020 at the Chicago International Film Festival and BFI Flare London and won Best Film at CineOdyssey, Best Documentary at Teaneck International and the Black Lens Jury Award at Milwaukee Film Festival. The film made its broadcast debut on WORLD Channel in April 2021 and is currently streaming on PBS and WORLD.

Previously, Luchina co-executive produced and co-wrote the critically acclaimed feature documentary Birthright: A War Story, which appeared in more than 70 theaters nationwide, qualified for Oscar consideration and streamed on Hulu. She is the director of two scripted short films, including Danger Word, and has written and produced several nationally broadcast documentaries as well as numerous segments for television. She just wrapped producing two episodes of a History channel doc-series with President Bill Clinton and is gearing up to co-direct an independent documentary feature on predatory lending in housing.

Luchina began her career as a journalist and has written for People, the Miami Herald, The New York Times, O, The Oprah Magazine and ABCNews.com. Luchina is a Sisters in Cinema Documentary Fellow and a member of Brown Girl Doc Mafia and the Black Documentary Collective. Earlier this year, she received the inaugural Brown Girl Doc Mafia Black Director's Grant for her new project.