In the late 1960s, in the aftermath of the Watts Uprising and against the backdrop of the continuing Civil Rights Movement and the escalating Vietnam War, a group of African and African-American students entered the UCLA School of Theater, Film and Television, as part of an Ethno-Communications initiative designed to be responsive to communities of color (also including Asian, Chicano and Native American communities). Now referred to as the "L.A. Rebellion," these mostly unheralded artists created a unique cinematic landscape, as-over the course of two decades-students arrived, mentored one another and passed the torch to the next group.

Beyond the films themselves, what makes the L.A. Rebellion movement a discovery worthy of a place in film history is the vitality of its filmmakers, their utopian vision of a better society, their sensitivity to children and gender issues, their willingness to question any and all received wisdom, their identification with the liberation movements in the Third World, and their expression of Black pride and dignity.

HOUR GLASS - A young African American male rethinks his role as a basketball player for white spectators as he begins reading the works of Third World theoreticians like Frantz Fanon, and contemplates the work of Martin Luther King Jr., Malcolm X and Angela Davis. Directed by Haile Gerima. 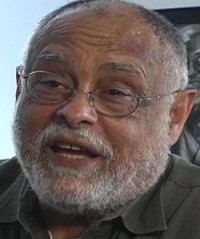 Haile Gerima is an independent filmmaker and professor of film at Howard University in Washington, D.C. Born and raised in Ethiopia, Gerima emigrated to the United States in 1967. Following in the footsteps of his father, a dramatist and playwright.

Gerima studied acting in Chicago before entering the UCLA School of Theater, Film and Television, where his exposure to Latin American films inspired him to mine his own cultural legacy. After completing his thesis film, Bush Mama (1975), Gerima received international acclaim with Harvest: 3000 Years (1976), an Ethiopian drama that won the Grand Prize at the Locarno film festival.

After the award-winning Ashes & Embers (1982) and the documentaries Wilmington 10-U.S.A 10,000 (1978) and After Winter: Sterling Brown (1985), Gerima filmed his epic, Sankofa (1993). This formally ambitious tale of a plantation slave revolt was ignored by U.S. distributors, but Gerima tapped into African American communities, and booked sold-out screenings in independent theaters around the country.

In 1996, Gerima founded the Sankofa Video and Bookstore in Washington, DC., a cultural and intellectual space that offers opportunities for self-expression, interaction, discussion and analysis through community events such as film screenings, book signings, scholar forums and artist showcases. Gerima continues to distribute and promote his own films, including his most recent festival success, Teza (2008), which won the Jury and Best Screenplay awards at the Venice Film Festival. He also lectures and conducts workshops in alternative screenwriting and directing both within the U.S. and internationally. 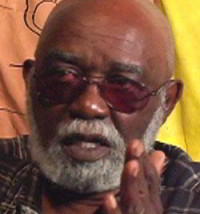 Arts educator and independent filmmaker Ben Caldwell grew up assisting his grandfather, who projected movies at a small theater in New Mexico. His passion for the visual arts lead him to study film at UCLA and reside in the neighborhood of Leimert Park, epicenter for the African American art scene in Los Angeles.

After teaching film and video at Howard University in Washington, D.C. from 1981-84, Caldwell returned to Leimert Park and created an independent studio for video production and experimentation that became the KAOS Network, a community arts center that provides training on digital arts, media arts and multimedia. It remains the only organization of its kind in South Central Los Angeles that offers courses in video production, animation, website development, video teleconferencing, CD-ROM production and Internet exploration. Its legendary Project Blowed is a weekly open-mic workshop that gave birth to rappers and rap groups such as Aceyalone, Medusa, Busdriver, Freestyle Fellowship and Jurassic Five.

Caldwell's films often trace historical and cultural connections. Eyewitness: Reflections of Malcolm X & the O.A.A.U. (2006) presents the Harlem reunion of ex-members of the Organization of Afro-American Unity. La Buena Vida (The Good Life) (2008), filmed over the course of three years while Caldwell taught at the California Institute of the Arts, documents the cultural exchanges between a group of hip hop artists and musicians from Los Angeles and their counterparts in Havana, Cuba. 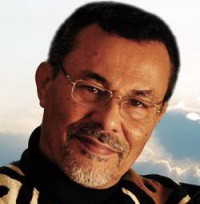 Bernard Nicolas has written and directed a number of films, including documentaries and short videos. Born in Port-au-Prince, he and his family fled from the political situation in Haiti and immigrated to San Pedro, California.

The political upheaval he sensed as a student led Nicolas to become co-National Coordinator of the National Association of Black Students. He obtained his B.A. in Economics at UCLA, where he also earned an M.F.A. in Film and Television Production.

His works include social issue documentaries such as Boat People and Breast Cancer: A Village Dialogue. The latter film was selected as a finalist for the Beacon Award from the Cable TV Public Affairs Association. Nicolas also wrote and directed Daydream Therapy (1977), a short film that earned him the Leigh Whipper Gold Award from the Philadelphia International Film Festival.

In the early 1980s, Nicolas moved to Zimbabwe, where he worked in their production services department. In 1992, he founded Inter-Image Video, the first enterprise to commercially release African Cinema on home video in the U.S. He has also served various roles for numerous independent films. In addition to his contributions to film, he continues to pursue his interests in writing, photography and psychotherapy.

Stormé (Bright) Sweet is a documentarian who fell in love with the cultural influence of filmmaking as an undergraduate, while studying Akira Kurosawa's Seven Samurai(1954) and Rashomon (1950) in a Japanese film class.

Stormé has produced and directed several individual accounts of lived history and the human condition. Some of her work includes The Single Parent: Images in Black (1982), in which black parents discuss their feelings about raising children alone, as well as Locker Room Rites (1978), which explores the superstitions of professional athletes. Stormé also produced and directed That's Love: Celebrity Tennis Tournament(1978) for the City of Long Beach, which aired on Public Broadcasting.

In 1982 Stormé and fellow filmmakers, Melvonna Ballenger, Julie Dash and Alile Sharon Larkin, formed the Black Filmmakers Collective as part of the independent black cinema movement. She co-produced and directed When I Grow Up I Want To Marry An African Prince (1984), a video with accompanying workshops exploring visual stereotypes in the media. The piece aired on cable TV and was presented at the National Black Programming Consortium Conference in 1982 in Atlanta, Georgia. Stormé's documentaries have also been used in workshops and as teaching aids in the California University system.

Current work includes Back Burner Baby, intimate discussions with siblings of children who have severe disabilities and The Journey (in production), a collection of legacy essays, gently examining the evolving social constructs of centenarians and other senior citizens.

Stormé has taught secondary education and lectured at Cal Poly Pomona. She is the Executive Director of the Aliah Sweet Fragile Hearts Foundation, an organization established in 2003 to provide support and grant wishes for siblings of children with severe, multiple, life-threatening disabilities. She is a speaker, writer and skilled researcher. Stormé was one of the first female sports agents certified by the NFL.

There will be a Q&A with directors Stormé (Bright) Sweet and Ben Caldwell after the screening.