IN A PERFECT WORLD... is a feature documentary that aims to explore all the requisite dynamics of what it is to be a man raised by a single mother. The inspiration for the film came from the director's own relationship with her son who has a largely absentee father.

IN A PERFECT WORLD

Over the course of several years, Daphne McWilliams began interviewing men about the relationships they had with their mothers and, to varying degrees, their absentee fathers. At the same time, she was raising her own son, Chase, as a single parent. She noticed that as Chase entered his teens, their relationship took a dramatic turn as he began coping with his most formative years and becoming an adult without the consistent presence of his own father. McWilliams realized it was time to turn the camera on her own family to document her son's painful abandonment issues while seeking to help him express and understand his feelings.

Thus the documentary became both a personal depiction of her son's maturation process as well as a sociological overview of what it is like to be a man raised solely by one's mother. Viewers hear the voices of a variety of men from various backgrounds and ages, sharing painfully personal anecdotes and allowing McWilliams to capture their current lives to see the men they've become in the wake of emotionally turbulent and unsettling periods of their youth.

"In a Perfect World..." is both a deeply personal and introspective portrait of a modern family as well as a probing cinematic essay examining one of society's greatest ailments. 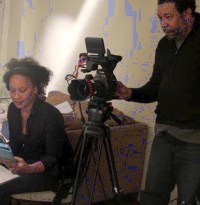 Daphne McWilliams, Producer/Director began her producing career by producing music videos for artists such as: Blues Traveler, Notorious BIG and Queen Latifah. In 1995, she was hired to line produce the Academy Award®-nominated documentary "Four Little Girls" directed by Spike Lee and produced/edited by Sam Pollard; Mr. Pollard is the Executive Producer on "In a Perfect World..." which is Daphne's documentary directorial debut.

Daphne was raised on Staten Island along with her parents and seven brothers and sisters.  She currently resides in NYC.

Discussion after the screening.