I Build the Tower is the true story of the life and work of Sam Rodia, the Italian immigrant who built the world-famous Watts Towers on a residential lot in South Central Los Angeles. Rodia's Watts Towers, designated as a National Historic Landmark by the United States Department of the Interior in 1990, are now a component site of the California State Parks, managed by the City of Los Angeles Cultural Affairs Department. http://www.ibuildthetower.com

Edward Landler got practical production experience with Satyajit Ray in India and Luis Bunuel in France, and worked on independent feature films in the United States. His first film, "Pharaoh's Dream", an experimental short, was shot in Calcutta and Los Angeles. 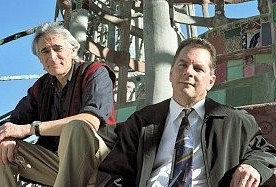 He is a founder and former president of the Independent Feature Project/Los Angeles (now Film Independent), a non-profit support organization for independent filmmakers and has taught film at California State University, Northridge, Woodbury University, and U.C.L.A. Extension. He is a regular contributor to CineMontage, the magazine of the Motion Picture Editors Guild, and is currently completing a cultural history of film.

Brad Byer is the maternal great-nephew of Sam Rodia, the creator of the Watts Towers. Over 20 years, Landler and Byer collaborated to make I Build the Tower. They started working together to make the film in 1983, when they shot the last filmed interview with R. Buckminster Fuller who provided a structural analysis of the Watts Towers. Since that time, their efforts to produce the definitive work on Rodia's achievement have become part of the history of the towers.

Q&A with director Edward Landler after the screening.