Following a filmmaker's journey from Ghana to China and back to Africa, Guangzhou Dream Factory provides a rare glimpse of African aspirations in an age of endless outsourcing. The film features a dynamic cast of men and women from Cameroon, Kenya, Nigeria and Uganda, 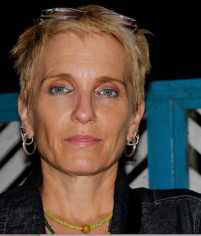 Christiane Badgley is a director and editor of award-winning documentaries and multimedia work. Christiane began her career in the San Francisco Bay Area where she was a frequent collaborator of acclaimed African American director, Marlon Riggs (she worked with him until his death in 1994, completing his last film, Black Is...Black Ain't, posthumously).

Christiane first worked in Ghana more than 25 years ago and has continued working on projects in Africa and with prominent African directors since that time. In recent years Christiane has focused her attention on the extractive industries and controversial U.S. investments in West and Central Africa, writing and producing film and new media work for multiple broadcast and online outlets. Guangzhou Dream Factory, Christiane's latest documentary (with producing partner, Erica Marcus), was made with funding from The National Endowment for the Humanities and The National Endowment for the Arts.

Director Christiane Badgley will be present for a Q&A after the screening.