CONTRACT, a 79-minute docudrama film explores aspects of the African Diaspora, history and culture that are not widely known or are normally overlooked in mainstream, popular and scholarly discourse.

CONTRACT tells the compelling story of two African countries (Cape Verde and São Tome and Príncipe) forever linked by a history of poverty and slavery, and two people forever linked by the unbreakable bonds of family and love.

It tells the story of Cape Verdean indentured servants who left their homes for a better life only to be bound by "contracts" that won't ever be paid off. The film, at its heart, also documents the filmmaker's journey to reunite his uncle, an indentured servant as well, with his family, 44 years after leaving home on a contract. This film is not only a powerful emotional experience, it is an in-depth look into the past and the legacy of slavery.

It's an intense journey not only for the contract workers, receiving 10 cents per day and a $10 life retirement from the São Tomé and Príncipe government, but also for the filmmaker who returns to his roots in the making of this film. 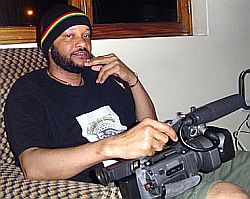 Guenny K. Pires, is from The Republic of Cape Verde, Western Africa and was born on the Island of Fogo. He obtained both his BA and Masters in Cinema & Visual Arts from the Universidade Lusofona y Porto in Portugal. Based in Los Angeles, California, US, Pires has traveled extensively over his 15 year filmmaking career, in pursuit of his vision to provide a means for understanding an often overlooked Creole people and their culture. Pires is the first multi-award winning filmmaker from Cape Verde and also the first to write, direct, and produce documentary films about Cape Verde. He is a multi award-winning Director dedicated to bringing the history and culture of his native Cape Verde to the world's attention.

Filmmaker Guenny Pires will be present for the Q&A.

This event is FREE!